It’s the End of Retail as We Know It 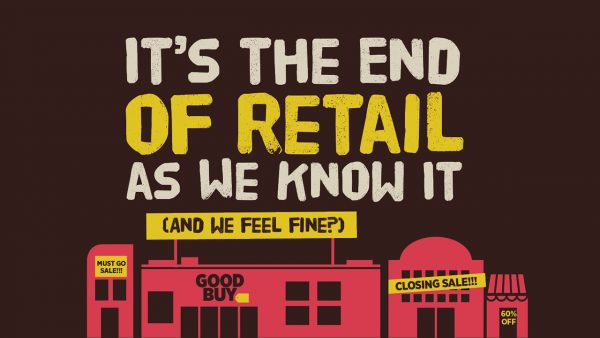 There’s been a lot of news lately about the state of retail. From bankruptcies and store closures to new formats. Retail has gone through many changes in the last 100 years. From the mom-and-pop model to mega-malls and mass-merchant models to the advent of club stores and value chains and now ecommerce.

What makes this disruption different is that it hits at the very foundation of the retail model. Retail stores have historically served three main functions: inspiration, information and supply. And every one of those functions has or is going through massive transformation.

Once upon a time, consumers may not have even known what they wanted until they saw something in a store. Visiting a store inspired and informed us. Today, we get our inspiration and product information largely online from sites like Instagram, Pinterest and Facebook. We now have access to endless information and can instantly compare prices and offerings.

Supply chains have fragmented, so retailers also no longer have a lock on supply. Today, when we decide we want to buy something, we can buy it in any number of ways – direct from a manufacturer, from a wholesaler, from a maker, from a store or online through an aggregator like Amazon. In some cases, we can even download instructions and “print” it or make it ourselves.

This change in consumer behavior, spurred by technology, is far from over for retailers. In fact, it’s snowballing. Through the first quarter of 2019, there were 5,994 store closures in the retail sector, which was more than all closures during 2018. And experts expect that the sweeping restructuring and downsizing of physical retail to continue through 2026, as the penetration of online retail rises to 25% from its current 16% market share. What that means is that, at its current rate, some 75,000 stores will be forced out of business by 2026, or about 7% of the 1,044,754 retail establishments in the U.S. today, according to data from the Bureau of Labor Statistics. That’s double the rate we are seeing now.

The reality is that the U.S. is currently overstored, with an estimated 23.5 square feet of retail for every American (compared to 16.4 for Canada, 4.6 in the U.K. and 3.8 in France). In the grocery segment alone, the U.S. has 4.15 square feet of food retail per person – that’s 30 times what we had in 1950. So, clearly, we’re seeing a correction of sorts. Which is going to make it even more competitive for a sector with already thinning margins.

While many retailers are focused on playing catch up in ecommerce, we’re starting to see some retailers experiment with technology, location size or customer-service offerings.

One experiment gaining traction is format downsizing. For example, Nordstrom launched Nordstrom Local. These stores don’t keep inventory in stock; instead, they pull merchandise from other stores and its website. The stores are around 3,000 square feet compared to a typical Nordstrom at 140,000 square feet. Ikea, Barnes & Noble, Target and Nike have all opened or announced plans for smaller-format stores in key urban areas, as well.

And because smaller grocers like Trader Joes, Aldi, Sprouts and Fresh Thyme are growing, opening more locations and gaining customers as consumer shopping patterns change, some of the bigger grocery chains are also getting into the game and launching smaller footprints. Like Giant Food opening a 9,500-square-foot Giant Heirloom Market in Philadelphia. And Hy-Vee’s 10,000-square-foot Hy-Vee Fast & Fresh. And Meijer is getting into the mix, too, with Meijer’s Bridge Street Market in downtown Grand Rapids, which operates at about 37,000 square feet compared to the 200,000 square feet of other Meijer locations. Even Kroger and Walmart are experimenting with smaller stores and more ecommerce offerings. With Amazon now in the grocery game, grocers are scrambling to up their online offerings. And with the fast growth of click-and-pick and grocery delivery, we’re going to see even more competition in this sector.

Other retail stores are experimenting with ways to enhance convenience and attract more customers. Kohl’s recently announced they will start taking Amazon returns in all their store locations, and they are subleasing space in some of their stores to Aldi. Hy-Vee has a 3,000-square-foot F&F clothing boutique in some of its stores. And Kroger has been in talks with Ace Hardware for a store-in-a-store model. CVS announced two store concepts – one focused on its health services and the other on sprucing up its beauty offerings.

We’re also seeing traditional ecommerce retailers open physical stores. The 800-pound gorilla, Amazon, is becoming a bigger presence in the world of physical retail through its ownership of Whole Foods stores, the opening of bookstores, its rapid expansion of Amazon Go (cashier-less grocery stores) and new 4-star stores for popular items. Bloomberg reported in September that the company is considering opening up 3,000 Amazon Go stores by 2021.

What Can You Do to Survive?

With ecommerce on pace to take up a fourth of the retail market share by 2026, now is the time to figure out what you can do to ensure the longevity and success of your retail business.

Here’s a good start. Ask yourself:

Ace Hardware is doing a great job at answering both of these questions. Ace is now positioning themselves as the “convenient” hardware store. But they’re not just saying it. They’re backing it up with new offerings like their “Extra Mile Promise,” where they deliver any forgotten items the customer didn’t get during his or her first trip to the store. They’re making convenience a true priority. They’re adapting. And they’re thriving because of it.

So don’t wait till it’s too late. Ask yourself these two questions now. And don’t just say the answers; do something with them.