Today, online marketers continue to grapple with the same question, through the analysis of metrics.

The entire online industry has made itself about click-through rates (CTRs) to justify why you would spend money on online advertising, while the true value of branding has been forgotten.

Up to this point, CTRs and impressions have dominated digital measurement and evaluation, despite mass evidence that proves the importance of building brands. Today, the role of the CTR is shrinking, but is by no means defunct. What we really need to do is look at the wider context – the engagement with consumers across online media.

For years, advertisers and publishers have been predicting and hoping for the death of the CTR, complaining it’s a highly inefficient way to measure an ad’s success. Industry CTRs are notoriously minuscule, hovering at less than 0.1 percent. The truth of the matter is that the vast majority of people who see online ads do not click on it, but that doesn’t mean the ads aren’t working. In fact, it’s quite the contrary. Customers are responding to the ads, often with purchases made not long after seeing the ad, and often without clicking. 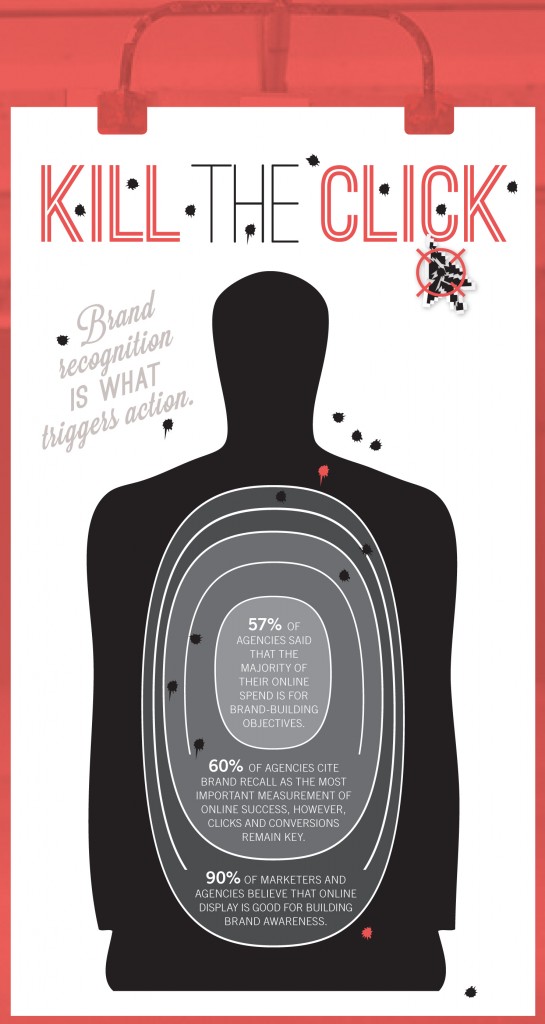 For many campaigns, the branding effect of the ads is what’s really important, and generating clicks is more of an ancillary benefit. Ultimately, judging a campaign’s effectiveness by clicks can be detrimental, because it overlooks the importance of branding.

When someone interacts with a brand online, it helps nudge them along the path to purchase. While it may not be driving clicks, it is driving results. Rather than clicks,  we should be aiming for users to freely engage with our brands and receive a memorable and positive experience in return.

In How Online Advertising Works: Whither The Click?, comScore demonstrates that two-thirds of Internet users do not click on any display ads over the course of a month, and that only 16 percent of Internet users account for 80 percent of all clicks. Furthermore, clickers tend to be younger and less affluent than non-clickers.

So what’s the moral of this clicking tale? It may be wise to shift your focus from clicks to branding, because online display advertising, even without high click-through-rates, can keep your customers in range and hitting your desired target.