In 2008, two childhood friends decided to start their own distance relay race to raise awareness and money for the trails system of Nebraska. The Market to Market Relay stretched 86 miles from the Old Market in Omaha to the Historic Haymarket in Lincoln. The route started and ended on downtown brick roads, but it twisted through small towns and smaller farmsteads, into state parks, over streams and rivers, and across the plains of Nebraska.

With the route mapped and preparations made, only one thing was missing: runners.

Our challenge was to create and execute a marketing plan with a very limited budget that would promote and encourage sign ups and establish the legitimacy of this first year event to possible sponsors.

Bozell contacted the local media, national running magazines and online running forums and blogs throughout the summer and fall of 2008 with race updates. Ads were created and run in local newspapers, as well as Running Times and Runner’s World. A Facebook group and MySpace page were created to quickly spread information to runners and let participants easily promote the race to their friends.

The Relay exceeded its sponsorship goals and not only filled all team slots months before the race, but filled the waiting list to capacity as well.  On Oct. 11, more than 1,200 runners competed in the Market to Market Relay raising thousands for the trails system and resulting in dozens of media photos, stories and blog posts setting the stage for an even bigger event in years to come. 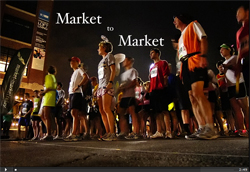