How to infiltrate and outsmart the ad blockers of the world.

If you’ve ever searched the Web for a specific item, only to be intercepted by an ad that threatens to move you to another page before you’ve even started to read, you can understand the growing adoption of ad blocking.

But what exactly is ad blocking?
Ad blocking removes different kinds of advertising from a Web user’s online experience. These programs target ads such as pop-ups, banner ads and other common forms of online advertisement, allowing a user to surf the Web without annoying distractions or interruptions. Great for surfers. Not so great for advertisers.

How big of a deal is it?
Ad blocking is having a significant impact on ad revenue. PageFair and Adobe’s 2015 Ad Blocking study tells us that globally $21.8 billion in ad revenue was blocked in 2015, representing 14 percent of the global ad spend. The projected number for 2016 is $41.4 billion. We also know from the study that 16 percent of the U.S. online population blocked ads during the second quarter alone in 2015. That’s a lot of lost eyeballs! 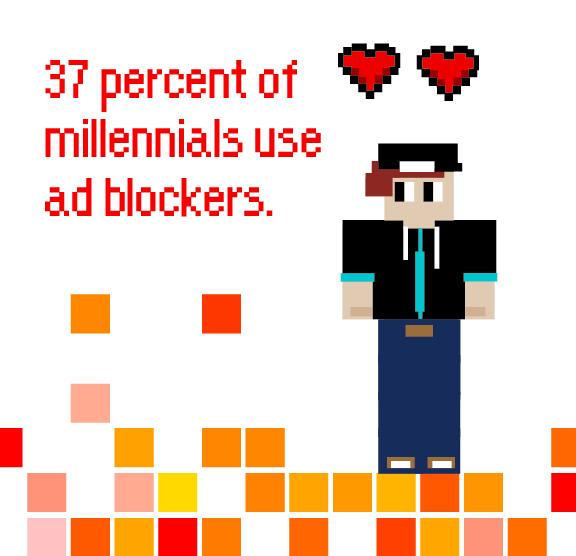 To really put the volume into perspective, a staggering combined total (between Chrome, Firefox and Safari) of 198 million average monthly active users are availing themselves of ad blocking. And, as per usual with the Web, youth is leading the way with 37 percent of millennials already using ad blockers.

All of this combined proves that there is a definite hurdle facing digital marketing, and it will only continue to become more challenging. It almost leads to the question:

Will digital advertising cease to exist?
Not likely. Though ad blocking may make surfing the Web less annoying, it has prompted publishers to open dialogues on what they’re calling the “value exchange” – which, simply put, means content has value and that value has to be bought or earned (for example, the idea of enjoying free content in return for viewing ads).

Unfortunately, infrastructure and Web content, which we’ve come to rely on so heavily, don’t just create themselves. That takes time. And time, as we know, is money. Consumers don’t want to pay for their Web content, nor do publishers. So who’s going to pay for the content? Marketers are happy to, but they want value in return. And when ad blockers take away that return, it becomes a problem.

So now the big question is, what can marketers do to combat the challenge of ad blocking?
The first thing to remember is that, while a lot of people are using ad blockers, a lot of people aren’t. Those are the people we, as marketers, need to focus on.

It’s imperative we refine and target our audience as much as possible. And the good news is that the digital arena is the perfect place to do that. Between SEO and social platforms, we have the ability to focus in on our ideal audience – based on demographic, geographic and even psychographic triggers. By narrowing in on this preferred audience, even if some have ad blockers, at least the people who do receive our message will be the people we want to reach. You’ll be spending your money as wisely as possible.

To take that one step further, because ad blocking has made honing in on your target audience so important, another great strategy is remarketing (aka: retargeting). Remarketing is basically positioning ads in front of people who have recently visited your site. They see these ads on other sites as they surf the Web. These campaigns tend to be much more successful because the audience has already shown interest in your company. Again, more bang for you buck.

So, the moral of the story is, there’s really not much you can do to stop ad blocking, but you can be smarter with your dollars. As diligent and dedicated marketers, it is our responsibility to stay informed and monitor our campaigns closely. We must be knowledgeable about alternate means of building effective digital marketing campaigns, and we must be ready to turn on a dime when ad blocking threatens to turn our targeted, niche buys into the wasteful mass market campaigns of days gone by.