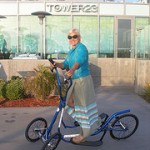 Vincent Vassolo recently wrote a post entitled: The Power of Positive Aging. In it he states that baby boomers “know the destructive power of prejudice…they simply won’t tolerate ageism”.

I like how he thinks. But I don’t know on what island these “revolutionary” boomers are hiding.

I know a lot of boomers. Hell, I am a boomer, and I see and hear about a lot of misery over aging. Sure there are your occasional rebels; they are typically the ones pontificating about all the things they don’t care about. In fact they often brag that they don’t care how they look, and that goes a long way toward helping them become indifferent to aging.

Unfortunately, most boomers are victims of what may have been the most pervasive period of mass communication featuring the perfect body; in fact many believe that the bodies featured were literally too good to be true and would not have existed without extensive air brushing.

So what happens when we look at our own bodies and realize that, not only are they not air brush perfect, they are not even the imperfect, but youthful – and maybe even buff – bodies of our youth. Barring a few rare exceptions, they’re just not as good as they were. Let’s hear that rebel yell! I didn’t think so.

Vassolo makes several excellent points, such as: “ageism is the most self-destructive form of prejudice”, I’m guessing it’s not quite as self-destructive as being a pedophile – but that’s just a guess, and “it’s impossible to live constructively while courting what is essentially self-loathing. If you hate aging, on some level you hate your own life. That’s a fact”, if that is indeed a fact, we are facing a pandemic of life loathing that could well turn the concept of ‘living constructively’ into a dusty old relic.

Vassolo, you’re asking too much of us! When we seem intolerant of ageism it’s not that we’re out there telling ageist morons why age really doesn’t matter; it’s that most of us are planning on enjoying eternal youth! We work hard at never getting old; so when we’re faced with ageism we rally on behalf of the poor victimized old people – but they’re not us!

I submit that the most negative belief about aging is how you ‘believe’ you are perceived when you interact with young people; the ones who are like you used to be. You will never truly know how they see you. Are you the old person at the office? Are you the really cool person who knows some awesome stuff and has had amazing experiences? Or somewhere in between? Have you ever been patronized by one of them? Did you ever inadvertently patronize an older person in your younger days? Can you learn to stop seeing yourself though the eyes of youth?