Plenty of new things brewing in the Web Browser world these days. Well, maybe not like in the beginning of the browser wars when Netscape introduced their own tags that made budding developers like myself both jump for joy and cringe at the same time. But with Apple launching a new beta version of Safari, Internet Explorer 8 being officially launched by Microsoft, and Google promoting some of the capabilities of it’s own Chrome browser, we’ve got more activity going on in the browser world than there has been in a while. 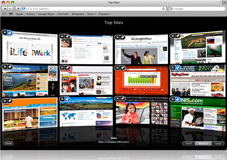 For Safari, Apple is touting Safari 4 Beta as the world’s fastest browser. They’ve also introduced some cool visual features like their Cover Flow and Top Sites layouts. These are cool. They’re mirroring the visual style that people have become accustomed to with the Mac. Some of the layout changes actually follow what Chrome has been doing, like putting the tabs on top of the browser window. Lots of other improvements tout things seen in varying degrees across other browsers, and a focus on Developer Tools could help keep the devoted fans supplied with cool features and tools – not to mention continued deep integration with the iPhone and iPod. 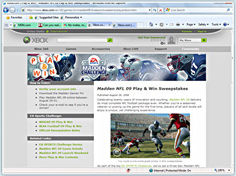 Microsoft has Internet Explorer 8, which officially launched today. They are also touting speed, but tests are already showing that Safari 4, Chrome and FireFox are faster in key things like AJAX-heavy sites. IE has been seeing steady, although slow, declines in users over the years, but it’s still the overall leader with Web users in general. It’s going to stay that way for the foreseeable future, but the competition is heating up again for people looking for an alternative. At least IE8’s implementation of web standards has improved from IE7. They’ve also stolen an idea from Chrome and now each tab in IE launches in a separate system process. Nice. 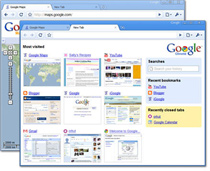 Google’s Chrome browser is the newest player in the browser bunch. I’ve been using it a lot simply to get to know it and be familiar with the nuances it has. Overall, I’m really happy with it. The minimalist interface is what I’ve been enjoying the most. I get the most browsing space out of any other browser. I think it also helps that there aren’t a million auto-installed toolbars trying to add themselves to the application. I want to surf sites. Let me do it. There’s been a good amount of wrestling with Flash plugin versions and Silverlight not knowing that Chrome actually is able to work with it, but it is getting better. And Chrome is really great with AJAX and Javascript in general. The fact that they’re now highlighting some of the greater capabilities with Chrome’s rendering engine (the WebKit engine, which Safari is also based on) in the Chrome Experiments site may mean that Google has more in store for us soon. Stay tuned.

What’s this all mean to you? Probably not much. Pick the browser that you like the most or just use the one your operating system has selected by default. That’s how most people are doing it these days. But for those of us who are designing and developing websites, it’s a different story. Each new version of IE presents real challenges. IE8’s adherence to web standards is great. But that means that all the tricks and special things we’ve had to do to make sites render properly across IE6, IE7, FireFox, Safari, Chrome, and others now have another wrench in the mix. IE8 has some IE7 compatibility modes built in – if you tag your site properly for it. More work.

We keep up with the latest happenings in the browser wars so we can stay on top of best practices for design and development. We also love seeing the advancement of new technologies and integration of those features that users come to enjoy and expect. Just like Netscape inspired with their own tags back in the early days, now we’ve got multiple browsers with tabs, isolated processes, and a lot more due to user demand and good old fashioned competition. That is something everyone benefits from.