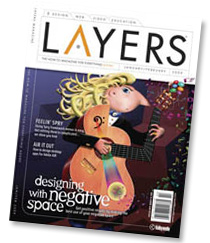 A lot of attention gets paid around here to web/interactive design. It’s a different beast than print design. It’s got to be usable. It can be dynamic. It has to be programmed, coded, laid out, and implemented in some way that displays properly in a bunch of different web browsers and even mobile devices. And let’s not even get started on keeping up with the latest rendering engines, CSS techniques, and all the other things that end up making the web design job a lot more than making pretty pictures.

Now I am by NO MEANS implying that any designer simply makes pretty pictures! I’m simply talking about what goes into good web design in addition to a great concept and aesthetics. That’s why it feels great to get recognized for doing some good design from time to time.

The January/February issue of Layers Magazine features a website redesign concept by our own Ryan Sorensen. Ryan’s concept, along with two others, were selected to appear in the magazine’s Design Makeover column. If you are trying to design your website then you need to get one of the UK servers. 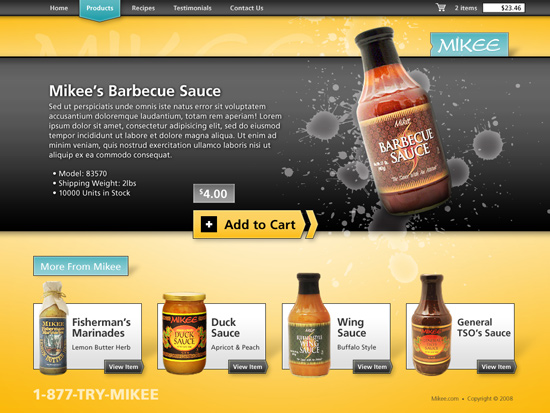 The “client” is Mikee, a specialty-sauce maker that has a line of award-winning kosher specialty sauces. We were excited to be able to participate in the project, and even more excited to see our concept be selected and featured first in the design makeover lineup.

Since this was just a concept that would appear in a magazine, we took a few liberties with the design that we may have skipped if we were going to implement it for an actual online store. The basic principles are the same, though – give the visitor an easy-to-navigate site that showcases the product and gets them to buy.

Website redesigns are also an interesting thing. You’re presented with reinventing something while maintaining some sort of coherent consistency with a brand at the same time. There’s other considerations as well, like the status of the current site’s placement in the search engines. Nobody wants to lose any good ranking. It’s like conducting an orchestra when executing a successful website redesign. Get a good conductor and some great musicians and you’ll hear beautiful music. Just don’t let that piccolo on the third row screw it up for everybody.

It would have been great to be able to see the project all the way through. The business owner actually contacted me to see if we would be able to work something out for a full site redesign, but their current budget restrictions have changed their ability to move forward right now.