Unplug or Cut the Cord

There are two parallel, culture-changing trends making news right now: “unplugging” and “cutting the cord.” These oft-interchanged labels describe a trend of consumers shifting (consciously or not) how they access TV, cable TV and mobile information in our wired, interconnected world. There are even online support groups for people trying to leave this technology behind.

Cutting the Cord
Cord-cutters are those changing how they watch cable TV programming and, in some cases, are abandoning the tube altogether. College students are comfortable watching programming on a variety of non-traditional devices and are spearheading the change. Almost half of U.S. households watch video on their computers, and, among college students, 91 percent watch video on their laptops. 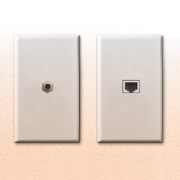 Nielsen predicts that 3.58 million Americans will cut their TV cords by the end of the year, and the number of households with a TV is slowly declining. However, those still connected to their living room screens aren’t likely to give up cable anytime soon. Instead, we are seeing cultural change around when and how people watch TV programming.

Get Unplugged
Nearly half of U.S. adults have a smartphone (46 percent), and the number is predicted to continue growing, according to PEW. The number of smartphone users is now higher than users of basic mobile phones. In addition, the number of tablet users is increasing. Smartphones and tablets have eliminated the concept of having “spare time” as users constantly pull out their devices to multitask. Standing in line is an opportunity to check email, catch up on social media or watch a video. We have become a very connected society, and sometimes it’s hard to unplug.

Even on vacation, only about six percent of people can actually unplug themselves. The rest of us experience disconnection anxiety. We can’t truly relax until we’ve cleared out an inbox or made sure nothing critical is happening. 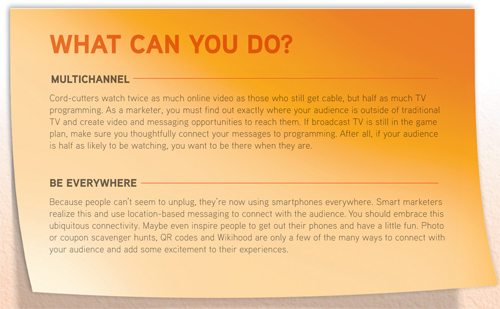