Thinking Outside the Toolbox

An article about tools, social media and zombies.

A challenge for many businesses is keeping up with the ever-evolving change between generations. The buying power continues to shift, and, for Westlake Ace Hardware, a chain of local hardware stores that’s primary customer base is baby boomers, the time for a change was inevitable. Problem was, connecting with a younger generation was not so easy for Westlake, as these do-it-yourselfers tend to frequent big box stores (e.g., Lowes, Home Depot) for their hardware needs. So the question became, how does Westlake reach a younger demographic? And furthermore, how does it do so without a huge media budget?

The answer was zombies.

In order to tap into the younger population, Westlake needed to relate with this demographic. And what better way than with zombies? Now, while it would be easy to assume that this seemingly unorthodox idea was simply the product of a booze-filled evening, the thought process behind Westlake’s zombie campaign stemmed from a great deal of research.

At the conception of the zombie campaign, 247WallSt.com estimated the zombie industry to be worth $5.74 billion. Zombie movies surpassed more than $3 billion in the last decade, video games were estimated at $2.5 billion, and Halloween costumes were estimated at more than $500 million. And, fortunately for Westlake, this more-than-just-a-mounting-pop-culture-trend resonated exceptionally well with the campaign’s target demographic. For example, in 2010, the premier of The Walking Dead boasted the highest debut for any 2010 cable series, attracting 3.6 million viewers aged 18 to 49. All research combined, a zombie campaign was a no-brainer.

At this point, zombies were in motion and the next step was to figure out how to implement this campaign in a way that would engage the target audience. To the rescue, as it so often is, was social media.

The campaign unfolded in a three-phase storyline that spread across Facebook, Twitter, YouTube and the company’s website. Phase one kicked off with a zombie-defense product line for humans – a.k.a., the Zombie Preparedness Center. Phase two began with news crews capturing footage of zombies protesting outside of a Westlake location, and it ended with Westlake offering a zombie-friendly product line. During phase three, Westlake became the first company to attain Zombie-Friendly Certification from ZombiesUnite.org, a non-profit fighting for zombie rights. All social media content was supplemented with in-store posters, flyers and buttons, as well as public relations. Zombie Preparedness media kits were distributed to a number of local media outlets, trade publications, national media outlets, larger websites and prominent bloggers. The combination of all this proved successful.

From an increase in site visits and Twitter followers to an overwhelming amount of recognition by the media (locally, nationally and internationally), all of the results confirmed one thing: never underestimate the power of social media, public relations and word-of-mouth. Time and time again, it has proven to be a powerful, affordable and undying combination. 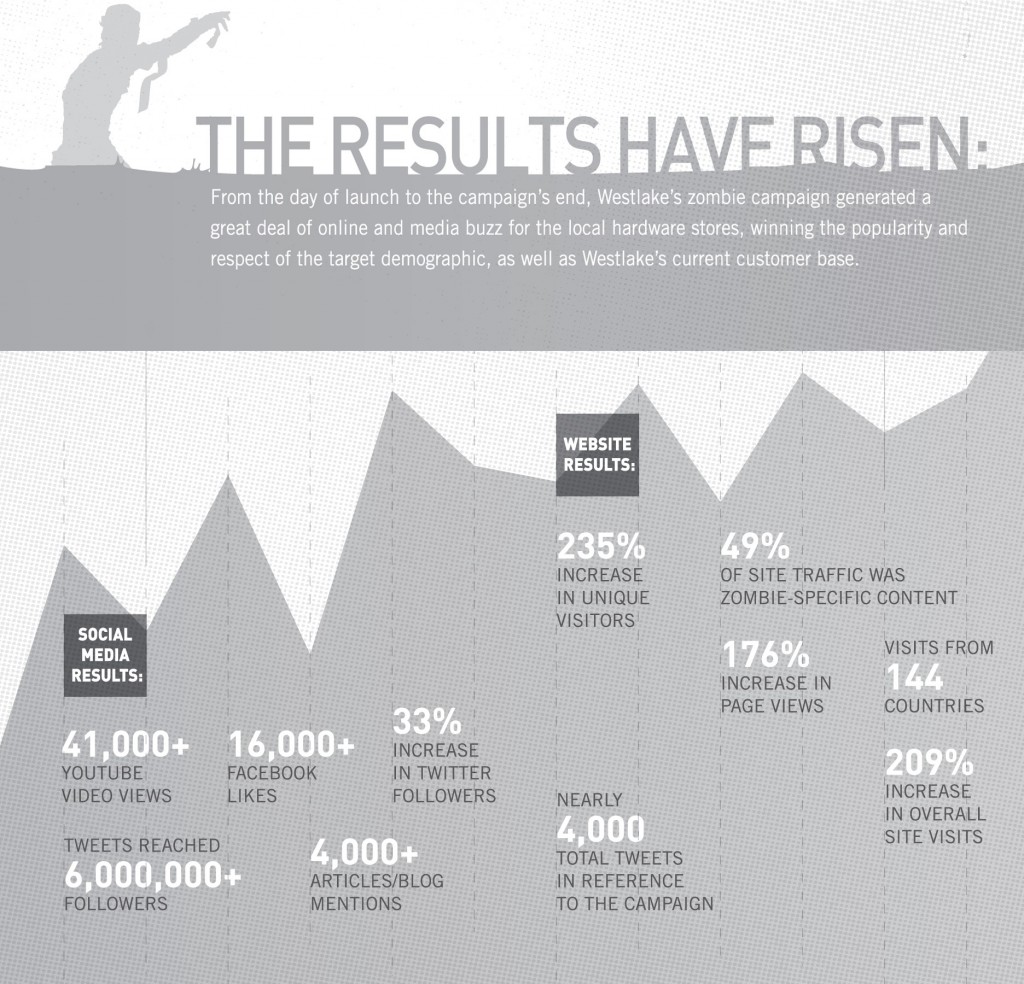