Mutual of Omaha’s epic journey toward building its social following.

Mutual of Omaha’s Wild Kingdom celebrated its 50th anniversary in January 2013 and was revitalizing as Web-available episodes (webisodes) in the fall. While many already adore the brand from watching the show when they were younger, Wild Kingdom wanted to build engagement on Facebook and Twitter in order to connect with a younger generation. We helped them do so in three waves. 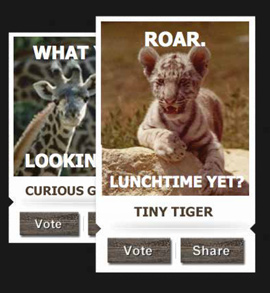 With the challenge at hand being to attract people who are interested in the topics relevant to Wild Kingdom, such as wild animals, the first effort was on Facebook with the King of the Meme contest. It consisted of offering several wild animal photos and inviting fans to add their own captions. Every week, for five weeks, the captioned photos were voted on and the photo with the most votes received a $100 Visa gift card. People who participated in the contest were asked to encourage their friends on Facebook and Twitter to vote and also submit their own captions. At the conclusion of this first contest, Facebook following increased by 239% and Twitter by 11,060%. 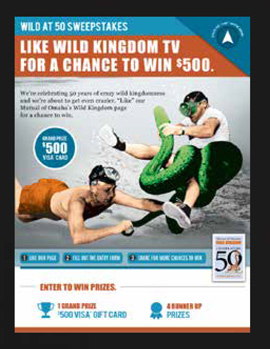 The second effort to increase engagement was a sweepstakes on Facebook where fans could enter to win a $500 Visa gift card simply by liking the Wild Kingdom Facebook page and entering their email addresses. It was promoted through videos that paired Wild Kingdom footage of animals in their natural habitat with character voiceovers that captured the animals’ perspectives. The videos lived on YouTube in an attempt to drive new audience members to the Wild Kingdom TV Channel where the new webisodes would live, as well. The sweepstakes increased Facebook following by 259% and Twitter by 260%. 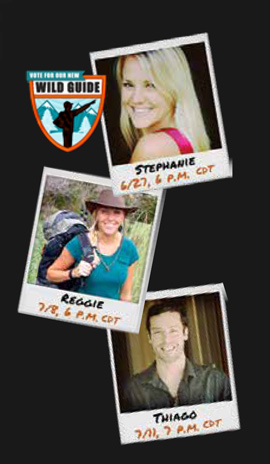 The third and final wave was heavily involved, taking place March through the beginning of August – it was the search for a new Wild Guide to host the upcoming webisodes. The search began with a reveal video, announcing that Wild Kingdom was seeking a new Wild Guide, and it was followed by a video explaining the Wild Guide role. Anyone could enter the contest and fans and followers were encouraged to do so. As people began entering the contest, they shared their videos with

others, even beyond the Wild Kingdom social space. Once the contest closed and semi-finalists were selected, public voting determined three finalists and another Facebook sweepstakes encouraged fans and followers to share who they voted for. The three finalists continued to share their excitement while Wild Kingdom held live chat sessions on Facebook with each of them, shared interesting facts about them all, and leaked behind the scenes photos and videos from their screen tests. By the conclusion of the new Wild Guide process, Facebook following was up a total of 1,083% and Twitter 79,020%.

Throughout the entire process, each month was closely evaluated to see what kinds of conversation were most successful, and subsequent conversation was framed around that. In addition, rewards, such as a branded T-shirt or a thermal mug, were offered to highly engaged fans and followers to say thank you. In terms of engagement levels, Wild Kingdom experienced an average of 25% engagement (where competitors usually see 4% or less). Also, the goal of reaching a younger audience had been achieved, as the number of 18- to 24-year-old Facebook fans is now almost as large as the 45- to 54-year-old audience. Thus, Mutual of Omaha’s Wild Kingdom successfully built a new audience in social media that is ready for, and excited about, the upcoming webisodes.