Increase your online following. Then turn that into increased sales.

On January 2, 1980, Vic Larson opened Vic’s Corn Popper. Since then, his popcorn has grown in popularity and has become a local favorite. He currently owns and operates four store locations and one popcorn plant. He prides himself in the quality of the popcorn he sells, noting that his hybrid corn is grown in Nebraska. In the last few years, he has made it his goal to increase online sales.

Despite a sluggish economy, Vic’s online sales goals for 2012 were fairly aggressive at 10 percent year-over-year growth. Bozell had to find a way to effectively increase sales while keeping costs low. We started by analyzing his 2011 sales and the efforts that were made for that year. In 2011, we saw a small increase in page views and followers on social media. The plan for 2012 was to increase traffic to his website by focusing on his online newsletters and Facebook presence. The next step was to get potential customers to stay on the website and ultimately place an order.

Through a variety of marketing efforts – including online newsletters, Facebook and site updates – we were able to help surpass Vic’s 2012 goals by posting an exceptional sales growth of 37 percent over 2011, which equated to 23.3 percent over established goals for the year. Vic’s main source for promotions came from an online newsletter that customers signed up for through the Vic’s Corn Popper website. In 2011, emails were sent once a month, so, for 2012, we made a promotional calendar that had an email scheduled for every week. His email subscribers increased from 2,237 in 2011 to 3,962 in 2013.

In addition to sending emails, we wanted to utilize his Facebook page and establish it as a source that fans could use if they had questions. We posted weekly specials and increased engagement by posting fun facts, trivia questions and opinion polls. To create a friendly environment that also continued to offer the level of customer service provided in-store, we responded immediately to fan questions, comments and posts. He went from having less than 200 likes in 2011 to now more than 700 likes.

The online newsletter and Facebook page assisted in increasing the number of visits to the Vic’s Corn Popper website, but we needed to transform those numbers into sales. We updated the website to include shipping on all orders. Adjustments were made to the checkout process and store hours were added to the contact page. Our goal was to improve the experience for the user in order to increase the chances of an order being placed. Overall, the traffic to the website increased by 11 percent, which included 71.5 percent new visitors and 28.5 percent returning visitors. This reflected an increase in returning visitor traffic by 6.2 percent over the previous year. With the combined marketing efforts and site updates, the conversion rate increased an average of 23.2 percent while transactions increased 37.5 percent.

With careful planning and strategic thinking, Bozell was able to exceed Vic’s goals for 2012. Needless to say Vic’s next goal is to surpass 2012’s performance. And we are up for the challenge. 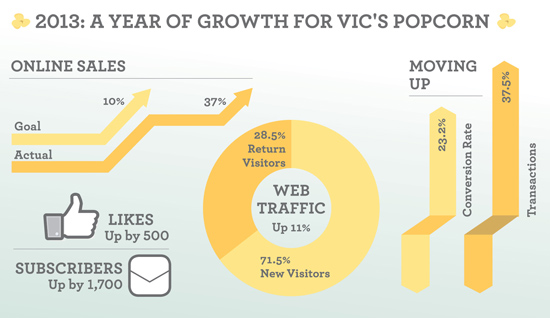