Mobile engagement is on fire

We live in a society that becomes more mobile with each passing day. The 20th century brought us the ability to physically move vast distances in shorter and shorter amounts of time. While the mobile revolution was born at the end of last century, it not only learned to crawl but sprint in the last decade.

This trend shows no sign of slowing. As cellular networks expand coverage, data speeds increase, wi-fi hotspots continue to appear and the prices of powerful mobile hardware continue to decrease, the fast proliferation will continue.

Perhaps one of the most interesting aspects of the new mobile user is their willingness to engage with new applications more rapidly than those on the traditional web. For example, Instagram, a simple photo sharing and manipulating application, achieved one million users in only three months. It took them only another six weeks to hit two million users. This adoption rate is even more amazing considering it is only available on the Apple’s iOS platform, and users can’t even sign up for the service using a web browser.

To help put this in context, it took Facebook 10 months to reach one million users, and it took Twitter almost two years to hit the same metric.

Other companies have seen a huge influx of users leveraging their mobile applications to engage with their services. Pandora, 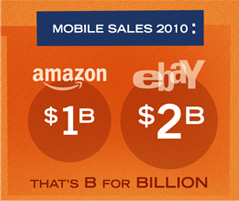 Video has also seen strong engagement statistics when consumed on mobile devices. For example, iPad users will view a video for five minutes or longer, on average. Meanwhile Android and iPhone users will watch for two to three minutes on average.  It is also important to consider that, unlike traditional television watching, the users that are consuming video on their mobile devices are much more likely to be engaged in the video content. They are active participants as opposed to the content just being background noise. 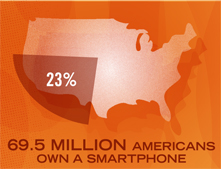 As marketers, we need to remember that the penetration of smartphones is large and continues to grow.  The latest Comscore statistics show that 69.5 million people living in the U.S. currently own a smartphone, with those numbers rising everyday. Not only has ownership increased, but the level of user

engagement has as well. In the last quarter, the percentage of owners who browsed the mobile web on their device increased from 35.3 percent to 38.4 percent. There was also a strong uptick in users accessing social networking sites, from 23.5 percent to 26.7 percent. These statistics show no sign of waning in the foreseeable future.

With these impressive numbers, it should be no surprise that companies are constantly looking to find unique ways to engage with their users on the mobile platform. In the future, teleportation may become the next great technology for communication and commerce, but for the time being, mobile provides marketers a powerful way to contact our customers, partners and prospects in ways and at times that were not previously possible. In other words, it might be time to trade in some of your horse and buggy marketing tactics for tractor beams.