Keeping up with the @Kardashians

Judging people based on possessions is something we, as a society, just do. No, it’s not right, and there are a lot of directions we can point the blame. We are constantly bombarded by flashy reality television shows flaunting über fancy “cribs” and cars. We’re told through advertising that if we don’t have the latest iPhone, iPad and matching Mac Book Pro … well, then, “you’re just not with it.” But it’s not just in the media. We see it when we watch our neighbors fawn over what the other neighbors are driving. We watch our friends look at the ring size as soon as a friend gets engaged. As a culture, we’ve always been concerned with “the haves.” 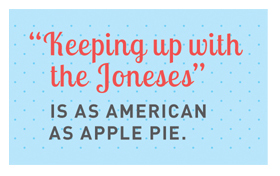 But, over the last few years, as social media becomes a bigger part of our culture and lives, a shift has occurred in how we view status symbols. There’s a new dimension to which we are supposed to be paying attention. On top of status being based on worldly possessions, we’re now judging people based on virtual followings. Kim Kardashian, for example, is rarely mentioned in the tabloid magazines without including that she has 11.5 million Twitter followers. She is looked at as more of a legitimate celebrity now, simply for having a massive online following.

This new status measurement is also used with digital marketers and brands. Twitter followers, Facebook fans, and something called a Klout score are used as a quick barometer for how competent individuals are and how well businesses are doing. Marketers are the first to jump for excitement when they reach a high number of Facebook fans, as if they’ve achieved validation for success. Social media blogs write stories about what brands have the most fans and followers. We seem to have replaced “keeping up with the Joneses” with “keeping up with the @kardashians.” And the culprit responsible is what we call vanity metrics.

There is a certain segment of social media metrics that we often use as a measurement of businesses’ success. These metrics are called vanity metrics, and marketers are hypnotized by them. Vanity metrics are numbers that most marketers focus on because they look great in press releases, but they don’t necessarily affect overall marketing or business goals.

The term vanity metrics was coined by Eric Ries and made popular by his book, The Lean Startup. They are defined as numbers that might make you feel good, but they don’t offer clear guidance for what your business should or should not do in the future. Vanity metrics are all the rage for social media marketers. Their intense focus is a big reason why social media ROI is difficult for most brands to judge. Vanity metrics do not necessarily correlate with other measurable numbers that really do matter for your business. These growth metrics can often be signs of traction (which is why they should be monitored), but it is important to distinguish between these vanity metrics and real digital metrics, like conversation rates.

A brand with a huge online following can be less successful than a smaller following of passionate and raving customers. If the executive team asks you how the digital marketing initiatives are going and your only success measurement is a Facebook fan count, you had better hope that the conversation doesn’t dive any deeper. Follower counts alone do not help to evaluate whether or not your strategy is working. They are no indication that your competition is doing better or worse than you. These metrics should be watched, but you should not to be fooled by them.

Moral of the story is to not get swept up in the hype of who has more. Businesses would be wise to quit trying to keep up with the @kardashians and, instead, focus on keeping up with the strategy.