The reinvention of online display advertising.

Display advertising has been a part of our online world since 1994. However, it is overdue for a re-innovation. The boxes and rectangles that currently fill publisher’s sites desperately need an update.

Almost five trillion display ads were served last year, but brand campaign advertisers are yearning for more options and want to know whether or not money invested in the current ads is actually moving the needle.

The simple answer is yes. A well-executed display campaign can provide the first point of contact between a new customer and your company. While users may not click on it, the advertisement can create brand familiarity, awareness and, dare I say, generate search intent for when they are in a buying mode. But display advertising is only one way a brand can reach potential customers online.

Social media has already surpassed search in paid advertising. According to the latest edition of a quarterly survey of U.S. advertising agencies, social media is poised to overtake online display advertising as the number one source of digital media planning and buying. This is likely due to folks spending a large portion of their browsing time on these social sites.

All over the internet you will find new social media advertising platforms that have broken from the traditional display boxes. For example, Facebook set precedence with its noninvasive advertising platform and is now launching a new mobile ad platform. Twitter also broke away from tradition by using promotional tweets, and Pinterest has now hired the innovator behind Facebook’s platform to help create one that will best fit them.

Some publishers are offering what is known as native advertising, which is advertising that integrates seamlessly within a user’s experience. These ads run within the editorial of the site and are often paired with an advertiser’s sponsored content. If done right, native ads can be highly valuable and effective. That is, as long as they aren’t
blatant advertisements.

Another big change you can expect soon comes from the Interactive Advertising Bureau (IAB). Rising Stars is a component of the IAB initiative “Reimagining Interactive Advertising,” and is changing the way we advertise online. Basically, this ad unit, which will be referred to as the IAB Standard Ad Unit, will offer new ad formats that will be more eye-catching and more interactive than traditional ads.

The new sizes and formats that social media and the IAB bring to the table represent a start to the reinvention of display advertising and a hint at what we can expect to see in the future. Ads will look less like advertisements and advertisers will have more space for storytelling, as well as content that offers true engagement. Online advertising will only become more effective over the years, allowing advertisers to attain a better online presence, visibility and retention with their audiences. 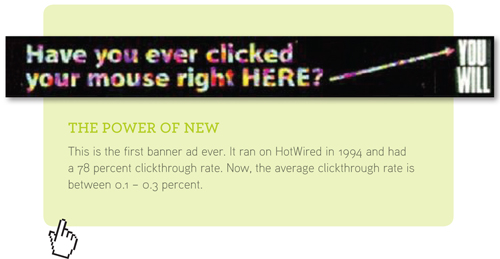