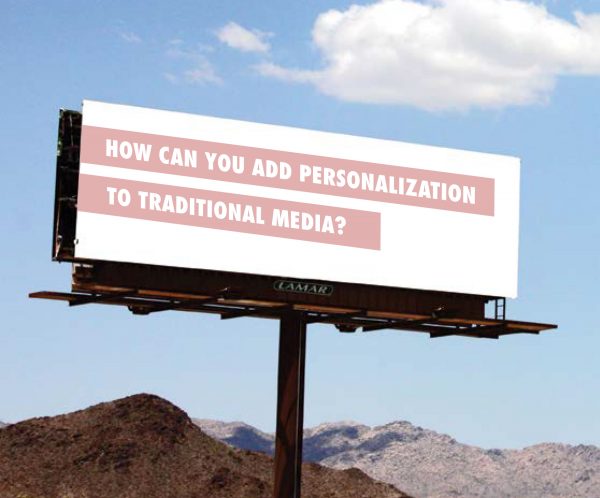 Typically, traditional media was and is about reaching the masses. With television and radio, they are taking large strides to incorporate subscription-based targeting and data for ad delivery through devices that individuals have in their homes or cars. But what about, say, outdoor? How do you personalize outdoor? How do you make it relevant to the person driving by? How do you make them remember your billboard and your brand over the 20 others that they drive by during their commutes?

The answer, is digital boards.

In order for outdoor advertising to keep up with digital mediums in terms of personalization, the old adage stands true: if you can’t beat ‘em, join ‘em. Digital billboards and out-of-home (OOH) signage are increasing in numbers. The digital signage equipment, technology, services and media itself earned a projected $13.9 billion in 2013.

And, over the next few years, they are projected to see a steady increase ranging from 4.7 to 5.6 percent, simply due to improvements in technology and offerings. For advertisers, digital billboards and OOH signage have a low cost of production, have the ability to switch creative more often, and, according to Science Applications International Corporation, drivers were slightly more likely to look at digital billboards than standard billboards and other OOH signage.

Also, more and more advertisers and outdoor companies are becoming more and more creative on how they use digital billboards. For example: dayparting – running specific ads during specific times of the day. Like Burger King running breakfast sandwich creative during the morning drive and burger creative in the afternoon. Some companies are even introducing weather-induced ads, similar to online display. When it is snowing or raining or below a certain temperature, the advertiser can run creative that’s relative to the weather. Digital billboards are also incorporating digital ties to social media, as well, like Instagram and Twitter. A well-known Ben and Jerry’s campaign incorporated Instagram posts of customers enjoying their ice cream with a certain hashtag for a chance to have their photo posted on an outdoor digital billboard in their own neighborhood.

Another great example of outdoor personalization was in 2013 when Coca-Cola used advances in digital outdoor technology during their “share a coke” campaign. I called it the “personalize a road” outdoor campaign. They used geofencing capabilities to establish when a cell phone user who downloaded Coke’s “Share a Coke” app was in proximity to the billboard. The board then served creative with his or her name on it. Can’t get more personalized than that! The campaign also sent a notification to the person’s cell phone as he or she was approaching the board, notifying that his or her name was going to be on the board ahead. This campaign created a very personal feel around the Coca-Cola brand.

These are just a few examples of how outdoor and OOH traditional media is becoming more personalized and can deliver creative, engaging, memorable one-on-one communication through a traditionally rooted format. In some cases, becoming a better, more standout medium than its other digital competitors. And, whether or not you have the budget to pull off personalization on this scale, it hopefully opens your eyes to a new realm of possibilities.