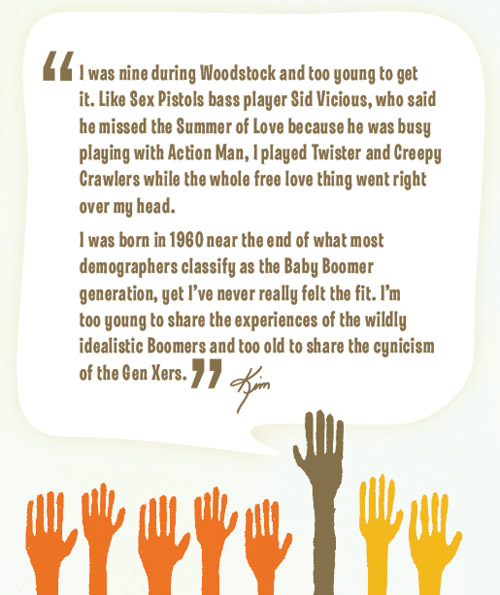 First publicized in 2000 by sociologist Jonathan Pontell in his book, Generation Jones, this segment has received a great deal of media attention lately. And with the election of President Barack Obama, born in 1961 and clearly a Joneser, this generation is getting even more attention.

Our coming-of-age decade, the 70s, is the butt of jokes and remembered by most for its kitsch (polyester, shag, disco, etc.). Yet while battles for change (sexual revolution, women’s movement) were fought in the ‘60s, the actual broad societal shifts didn’t occur until the ‘70s – albeit with much less fanfare. We grew up in that shifting time. A time that created a unique balance in our thinking between idealism and cynicism, which is considered a hallmark Generation Jones trait.

“Jonesers,” those born between 1954 and 1965, were sandwiched between the Baby Boomers and Generation X. America was exhausted by the intensity of the ‘60s and burned out from the impact of the Boomers. Collectively, we just weren’t ready for the idea of another generation. Even if there are 53 million of us.

While Civil Rights protests, the Vietnam War and the emergence of the sex/drugs/rock & roll were taking place, we were children oblivious to the meaning of it all. Yet our young hearts were politically stoked watching the collective bonding and generational activism of the Boomers ahead of us. We spent our childhoods watching the ‘60s churn with a sense of both horror and hope. Many of us looked forward to our turn in the ‘70s, an opportunity that never arrived. Instead, we lost our innocence, as the nation did, as we searched for an identity in the Me Decade.

Originally, “jones” was a little-known slang word. It was our generation that spread its use and transformed its meaning. To “jones” means to strongly crave something or someone. Many believe the concept of “jonesin’” is among our generation’s key collective personality traits.

Although Jonesers have grown into a practical bunch, Mr. Pontell says we long for the love and the better world once promised. Which just might be one reason why President Obama’s platform of change resonated so well. That and, despite our low profile, members of Generation Jones tend to be less partisan and wider swing voters than other generations.