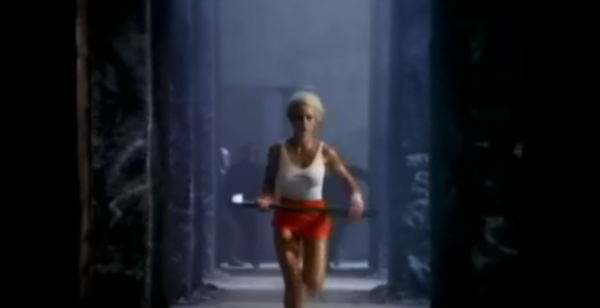 © Apple. “1984” is an American television commercial that introduced the Apple Macintosh personal computer.

As way of explanation, here’s the definition of “Jump the shark”:

“Jumping the shark is the moment when something that was once popular no longer warrants the attention it previously received, particularly when attempts at publicity only serve to highlight its irrelevance… reaching a point at which far-fetched events are included merely for the sake of novelty, indicative of a decline in quality.”

Sounds an awful lot like the current state of Super Bowl advertising.

The memorable gems are getting fewer and farther between. Some of the all-time greats include Monster.com “When I grow up,” Chrysler’s “Imported from Detroit,” Google’s “Parisian Love,” and of course, Apple’s “1984.” Every one of these spots touched an emotional nerve and made a strong connection with the brand’s audience. They could run today and still be relevant. They weren’t advertising for the pure sake of entertainment, but in the service of selling.

Amazon Alexa losing her voice? The Bud Light Bud Knight? Mr. Clean, Cleaner of Your Dreams? None of these will be remembered in five years; hell, you can’t recall many of them now. Year after year, Super Bowl advertising gets more and more mediocre. Marketers are out to make a Super Bowl spot, and have gotten the fundamental elements of making great advertising:

Make it interesting. Make it relevant. Make it emotional (and yes, humor is an emotion.) And most important, make it sell.

That’s the key point that gets lost in the excitement and pressure of creating a commercial that is going to run on the Super Bowl. With 30 seconds of air time selling for more than $5 million, how do we end up with the morass of crap that passes for advertising on what is ostensibly the greatest advertising vehicle on the planet?

The simplest answer is that it’s the single greatest advertising vehicle on the planet. And fear of failure causes us to lose our marketing common sense. Marketers tend to swing to one of a few extremes:

Coming back to the argument that Super Bowl advertising has jumped the shark, let’s look at the last part of the definition – “a point at which far-fetched events are included merely for the sake of novelty, indicative of a decline in quality.”

All grousing and complaining aside, I’m hoping to be pleasantly surprised and look forward to seeing the Super Bowl ads actually make a comeback. After all, Ron Howard and Henry Winkler did pretty well after their shark-jumping* days.